Python - How to the base

Goal: The objective is to have a memo to Python, this first page will cover the basics of this language.

On Gentoo / Funtoo you need to emerge Python:

If an old version of python is installed you need to eselect the version you want to use:

After the installation and that you selected the version you want to use, you can type in a terminal: 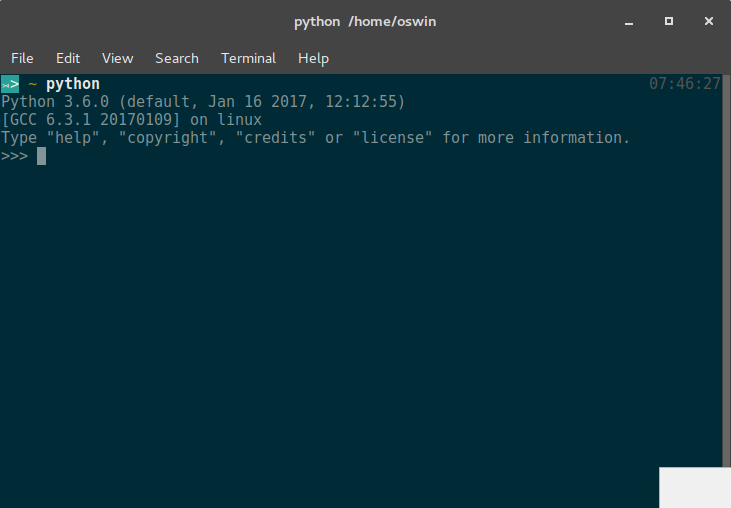 Python has two version, Pyhton 2 and Python 3. As you will learn with a programming language to speak to your computer, a first good idea is to learn the computer to speak to you. In Python this can be achieved with:

When printing things in Python, we are supplying a text block that we want to be printed. Text in Pyhton is considered a specific type of data called a string. A string, so named because they're a series of letters, numbers, or symbols connected in order - as if the readed together by string. Strings can be defined in different ways:

When developping with a language we run in to errors and exceptions. These are complaints that the program makes when it doesn't understand what you want it to do. So it is a good habit to read and understand them.

Here some common errors we might run in to when printing strings:

If the quotes are mismatched Python will notice this and inform you that your code has an error in its syntax because the line ended (called an EOL) before the double-quote that was supposed to close the string appeared. The program will abruptly stop running with the following message:

Another issue you might run into is attempting to create a string without quotes at all. Pyhton treats words not in quotes as command, like the print statement. If it fails to recoginze these words as defined (in Python or by your program elsewhere) Python will complain the code has a NameError. This mean that Python found what it thinks is a command, but doesn't know what it means because it's not defined anywhere.

In Python, and when programming in general, we need to build systems for dealing with data that changes over time. That data could be the location of a plane, or the time of day, or the television show you're currently watching. The only important thing is that it may be at different times. Python uses variables to define things that are subject to change.

One thing computers are capable of doing exceptionallu well is performing arithmetic. Addition, subtraction, multiplication, division, and other numeric calculations are easy to do in most programming languages, and Python is no exception. Some examples:

Above are a number of arithmetic operations, each assigned to a variable. The variable will hold the final result of each operation. Combinations of arithmetical operators follow the usual order of operations.

In the above code block, we use the modulo operator to find the remainder of 15 divided by 2. Since 15 is an odd number the remainder is 1.

Changing the contents of a variable is one of the essential operations. As the flow of a program progresses, data should be updated to reflect changes that have happened.

Updating a variable by adding or subtracting a number to the original contents of the variable has its own shorthand to make it faster and easier to read.

In the above example, we use the price of a sandwich to calculatye sales tax. After calculating the tax we add it to the total price of the sandwich. Finally, we complete the transaction by reducing our money_in_wallet by the cost of the sandwich (with tax).

Most of the time, code should be written in such way that it is easy to understand on its own. However, if you want to include a piece of information to explain a part of your code, you can use the # sign. A line of text preceded by a # is called a comment. The machine does not run this code - it is only for humans to read. When you look back at your code later, comments may help to figure out what it was intended to do.

Variable can also hold numeric values. The simplest kind of number in Python is the integer, which is a whole number with no decimal point:

A number with a deciamle point is called a float. You can define floats with numbers after tge decimal point or by just including a decimal point at the end:

You can alos define a float using scinetific notation, with e indicating the power of 10:

In Python 2, when we divide two integers, we get an integer as a result. When the quotient is a whole number, this work fine:

However, if the numbers do not divide evenly, the result of the division is truncated into an integer. In other words, the quotient is rounded down to a whole number. This can be suprising when you expect to receive a decimal and you receive a rounded-down integer:

To yield a float as the result instead, programmers often change either the numerator of the denominator (or both) to be a float:

We have seen how to define a string with single quotes and with double quotes. If we want a string to span multiple lines, we can also use triple quotes:

This string spans multiple lines, and is still contained in one variable, multi_string

When a string like this is not assigned to a variable, it works as a multi-line comment. This can be helpful as your code gets more complex:

Sometimes we have a need for variables that are either true or false. This datatype, which can only ever take one of two values, is called a boolean. In Python, we define booleans using the keyword True and False:

Python automatically assigns a variable the apporpriate datatype based on the value it is given. A variable with the value 7 is an integer. 7. is a floatm "7" is a string. Sometimes we will want to convert variables to different datatypes. For example, if we wanted to print out an integer as part of a string, we would want to convert that integer to a string first. We can do that' suing str():

Another useful data type is the string. A string can contain letters, numbers, and symbols.

In the above example, we create a variable name and set it to the string value "Ryan", we also set age to "19" and food to "cheese".

Strings need to be within quotes.

There are some characters that cause problems. For example:

This code breaks because Python thinks the apostrophe in 'There's' ends the string. We can use the backslash to fix the problem, like this:

Each character in a string is assigned a number. This number is called the index. Check out the diagram:

In the above example. we create a new variable c and set it to "c", the character at index zero of the string "cats".

Next, we create a new variable called n and set it to "n", the character at index three of the string "Ryan"

Notice that in the first "cat" example we are calling the 0th letter of "cat" and getting "c" in return. This is because in Python indices begin counting at 0. Therefore, in the string "cat", the first letter, c, is at the 0th index and the last letter. s, is at the 3rd index.